Sometimes it’s a harmless image, a casual gesture that makes everything clear, the whole absurdity of a cruel story, which is old and still always does not stop. 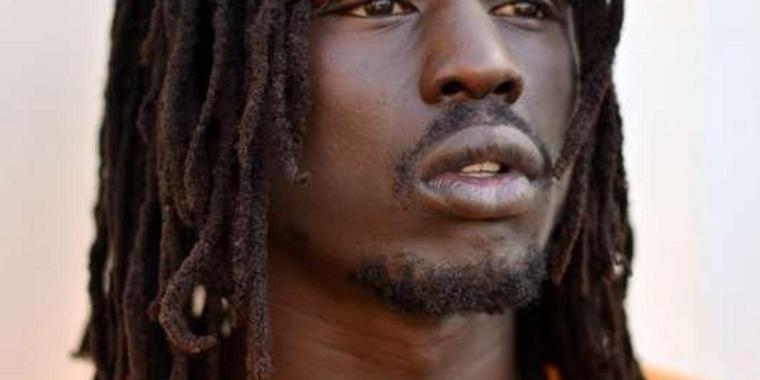 He will use the stage of the Semper Opera House on the day of the award ceremony for various rap songs: Emmanuel Jal. Source: PR

Two little boys run along a river. Keep hands, how little kids just do it that quickly best friends. One of them is Emmanuel Jal, at the age of nine. Recorded by a film crew in 1989 in a refugee camp in Ethiopia. A few months later the boy with a gun on the shoulder and peers on the side through the training camp for child soldiers will trot and singing: “we are not afraid, we’re men”. In the imagination, the two images slide over each other. But they do not fit.

When Emmanuel Jal, former child soldier from southern Sudan, gets the Dresden price on February 16 at 11: 00 in the Semper Opera House for its commitment to peace, also this clip from the movie “Warchild” by Karim Chrobog will be shown. It is fortunate that the Director, who made the film about Emmanuel Jal, found this old picture. And that was precisely Emmanuel was filmed at the camp and interviewed. Because the photos of martial upgraded and scowling face skyward child soldiers, as known, say not all long. What even earlier was not, not, that child soldiers are at night crying on her bed. Or during the battle, oozing a gun in their hands, scared.

Emmanuel, who is 34 today is also told. But he doesn’t know it exactly. His date of birth has been lost in the turmoil of war, which lasted 20 years. “We have agreed on the 1.1 1980”, says JAL. Perhaps it is also a year older. But what does it have for a difference whether a child with ten or eleven shoots a first time in combat.

First was the rout that began when he was six. But the war put the family to where she fled too. Burning villages, burned people. Then the hope. The father, once a high militiaman, the SPLA joined, the South Sudan Liberation Army. And he sent two soldiers to pick up his son. He should go to school in Ethiopia, he was told how hundreds of other boys who were with him on the way to the border. Emmanuel reached the refugee camp after week-long walk, he at first actually went to school. The film shows him as he eagerly raises his hand in the classroom. In the time interview, and says that he wants to learn, always.

But it’s over quickly, learn at least with arithmetic and English. For the war craft is taught in the training camp located near the refugee camp it. In his first battle, he runs away and is punished after hard. He never does it again. He sees the dying on the other side of the front line, stops screaming “Mama” and wonders whether it was his ball has taken.

15 years later, he faces 50 000 on the stage in London’s Hyde Park. It’s the concert for Nelson Mandela’s 90th birthday. Peter Gabriel Announces Emmanuel Jal. A musician, as Gabriel, who had the potential of the young Bob Marley. And then Emmanuel begins to sing. By Emma McCune. “What would have become of me, would not have saved me Emma McCune.” He RAPs and dances and jumps. And the audience sings with emphatic the song, which has something of a hymn, a hymn to Emmanuel’s Saviour. The British employee of a humanitarian organization had the then 13 year olds from the Sudanese war brought to the Kenya where he could go to school and eventually it will, what he is today: a peace activist, who was located at Amnesty International engaged, fighting against the use of children as soldiers, for the control of arms exports. He every year before thousands of young people speaks but mostly peace over war. And without Emma he would have been no musicians, the star rapper, as he is today.

But black and white diagrams are wrong in Africa. Emma McCune, who died in a car accident in 1993, helped child soldiers – and was married to a Sudanese warlord. The best known, until today. Ex – Vice President Riek Machar is the rebel leader recently flamed on conflict in South Sudan.

“I’ll be so happy when there is peace in Sudan”, sings Emmanuel in “Gua”, the song with which he first was ten years ago throughout the African continent to the star. He will sing also this title in the Semper Opera House and others like “Emma” and “We want peace“, a title which he has recorded with, among others, Alicia Keys and Peter Gabriel. He will give the concert with a rather unusual in the Opera cast. He is accompanied by his London DJ as well as a background singer and a guitarist.

The eulogy on Emmanuel Jal keeps Fatou Bensouda, Chief Prosecutor of the International Criminal Court in the Hague. There it is called “Big Mama”, a tribute to the mixture of boldness and warmth that distinguishes them. Time magazine chose Fatou Bensouda in the circle of the 100 most influential people in the world. “The perpetrators, there are thousands, they should feel more secure,” Bensouda said in an interview in Stern magazine about the role of the International Criminal Court and their mission two weeks ago. Emmanuel Jal personally knows the Gambia-born jurist, she knows the issue of child soldiers. And she does something. In her first trial at the Court, she condemned the Congolese Thomas Lubanga 2012 due to the recruitment of child soldiers.

“I think I’ve survived to tell my story,” Emmanuel Jal in “Warchild” sings. He told already in many places of the world. On February 16, he will do it the first time in an Opera House.